If, like $aban said Monday, good things can come from catastrophic events, he should consider tonight, his Alabama debut against Auburn, something like ... 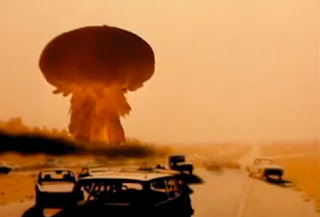 10:14 -- Tide's Rolando McClain deserved a flag for that shove and is currently receiving the chewing he also richly deserves. He's a true freshman, so can't blame Shula for that.

9:51 -- Keith Saunders with your latest Alabama brain cramp. A roughing-the-passer penalty gives Auburn a first-and-goal at the 8. He's also a senior, so another one fans will blame on Shula.

9:42 -- Quentin Groves gets a good piece of J.P. Wilson. Call the play the Tide's Pickett's Charge.

9:38 -- Roy Upchurch's 9-yard run gave Alabama the ball across the 20. Keith Brown just caught a long pass to the 43. Those plays could be the breakout the Tide needed, like U.S. troops in the Battle of the Bulge.

9:32 -- Tide has third-and-5 at the 6. Play of the game. John Parker Wilson overthrows Nikita Stover and Bama has to punt out of the end zone. That was a potential game-changing moment. If Auburn scores a touchdown, this one is over.

9:30 -- Can't claim I thought of this. But has Under Armour been cheap with the Tigers? Nary a Tiger has sleeves. I might see one, actually.

9:27 -- Brain cramp, massive brain cramp by Matt Caddell. Why field that punt at the 5? Then, he fumbles it and the ball goes out of bounds at the 1. Oh, remember, Caddell is a senior. Blame Mike Shula for that one, of course.

9:22 -- Montez Billings just juked himself out of getting a first down. Grow a pair.

9:20 -- Auburn is backed up deep, just in front of the Alabama section. Think the Tigers feel surrounded? The French have some experience with that, too.

9:18 -- This one is settling into quite a stalemate ... a seige, depending on your perspective.

8:32 -- Cox is in for the halftime kneel. Time for both teams to have a friendly little truce and have a little off-time preparation.

8:27 -- Cox throws an interception that could give Alabama at least a halftime tie. Cox is also hurt on the play. Appears to be a right leg injury. Cox is helped off the field, but he's putting weight on his leg.

8:21 -- Another brainy move by a quarterback. John Parker Wilson takes a sack and puts the Tide out of field-goal range. Roy Upchurch rescued the chance at three points.

8:07 -- Momentum change. Brandon Cox sits down on the job on two straight plays, courtesy of Lorenzo Washington and Simeon Castille. The sacks took Auburn out of field-goal range. Then, a quacker of a punt against the wind.

8:05 -- Third-down pass to Auburn's Ben Tate and Alabama's Simeon Castille pulled a matador maneuver. Ole. Tate was all ready to dole out a shot.

7:56 -- Touchdown, Alabama. There's Saban's Battle of Trenton. Now, he needs to follow up quickly and head to Princeton.

7:52 -- Second quarter is about to start and the wind has kicked up pretty good. It's now at the Tide's back.

7:45 -- Good call on the pass interference. Jonathan Wilhite screened off the receiver like he was going for a rebound.

7:43 -- Hey, Alabama has crossed midfield. A long kickoff return and an end around got them there.

7:29 -- Auburn just declined an Alabama penalty, giving the Tide a second-and-8 rather than a first-and-15. Me thinks the Tigers are trying to send a message.

7:07 -- It's on. It's time for war. The archiduke has been assassinated. Both teams are on the field. (Let's all thank Nick now for me being able to make these overly dramatic historical references.)

6:58 -- That Auburn drum major's big entrance move would get him laughed at in the SWAC.

6:50 -- Auburn is having a moment of silence for former Alabama running back Siran Stacy and his family for the tragic car accident earlier this week. Classy.

6:47 -- Alabama has left the field and won't have as much time for milk and cookies. On the way, Simeon Castille spiked his helmet twice.

6:44 -- Auburn has left the field, presumably for some pregame milk and cookies.

6:36 -- And I was hoping for a good, old-fashioned, midfield, pregame brawl. There are seven uniformed law enforcement officers stationed at various spots on the 50-yard line between the teams.

6:34 -- Didn't realize this is the first Iron Bowl to be played on Thanksgiving weekend since 1992. That was a Thanksgiving Day game and Alabama won 17-0. That weekend, a friend and I drove to Ole Miss and watched the Egg Bowl. That trip's story is long and sordid. I'll have to fill you in some other time.

6:27 -- Hope is alive. Auburn's band is leaving. I haven't been to an Auburn game since 2004 -- nor an Alabama game, for that matter -- so this might just be a previously scheduled exit.

6:26 -- Just remembered. The Outback blimp is also making an appearance on the Plains tonight.

6:24 -- We regret to inform you that both bands have successfully entered the stadium.

6:19 -- Slight wind coming from the north, currently into the face of Alabama kicker Leigh Tiffin for warmups. Tiffin just pumped one in from 50 without much problem. His season high is 51.

6:14 -- You think Auburn is loose. Patrick Lee was just dancing to another tune ... while awaiting a punt in warmups.

6:10 -- There are three bowls who have passes tonight: Chick-fil-A, Outback and Liberty. OK, the Senior Bowl is here, too, but they don't count.

6:05 -- Bon Jovi's "Living on a Prayer" is going. Nice to hear the student section sing along with a classic from back in my day. I'm old.

6 p.m. -- It's an hour before kickoff at Jordan-Hare Stadium and there are five of us writers here representing your beloved Agonizer. Following in the example of Mr. Hornet, Josh Moon, and his blog, I thought "what the heck." I'm going to do a live blog of my own. Sure, me posting about football isn't quite what my lovely, widely ignored blog is about, but bear with me.
Posted by Stacy Long at 5:59 PM