Hernandez, Allen bowed down to Harvey 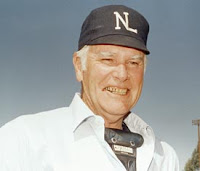 So, former manager Whitey Herzog and former umpire Doug Harvey are going into the Hall of Fame. Of course, Herzog managed the Cardinals, including a spry right-handed pitcher named Neil Allen.

Harvey, who was called "God" by the players out of respect (and his white hair), called balls and strikes not only for Allen but also a spry right-hander named Xavier Hernandez. (Researching this didn't take as long as I thought it would, thanks to retrosheet and baseball-reference.)

Heard this story long ago about Harvey, whose first ejection was Joe Torre in 1962. I can't find confirmation on the rest of this. Torre came out on a nothing call of Harvey's in Harvey's final season. He told Harvey that he had been Harvey's first ejection and, because of his respect for Harvey, also wanted to be his last.
Posted by Stacy Long at 12:19 AM