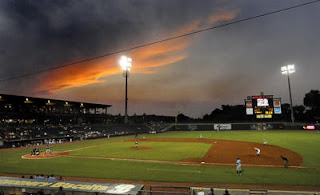 The Biscuits are starting the hunt for a new scoreboard with plans to debut it at Riverwalk's Auburn-Alabama game in March.

They're hoping to have the bids back around the end of October and will formally announce the new addition in early November. The team took ownership of the scoreboard in 2009 from the city in exchange for lower rent payments.

"We want it to have a big impact on the fan experience next year when they walk into Riverwalk Stadium," team president Greg Rauch said.

Biscuits owner Tom Dickson promises fans will notice. The current scoreboard has an LED display measuring 22 feet by 14 feet, which he said was impressive when the stadium opened in 2004. The new one will be bigger "by multiples of times," Dickson said.

"It's going to be huge," Dickson said. "There will be lots more bells and whistles and several more cameras. It will be amazing."
Posted by Stacy Long at 5:08 PM

Nice!
I know we needed new cameras, and while our scoreboard wasnt the worst in the league a new one will be a great addition!

Any chance this includes a camera upgrade that enables the biscuits to broadcast games live on MiLB.com? I know the Smokies already do live gamecasts online.

Thanks, and great choice of photo, I think thats just about the best view in baseball.