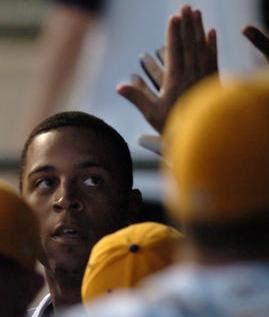 Former Biscuits center fielder Desmond Jennings has been named the Topps player of the year for the Southern League.

Jennings, who was the league's most valuable player, hit .316 with 37 steals and 69 runs scored in 100 games for Montgomery. He was promoted in late July to Triple-A Durham.

The Rays also had the top Topps player in the New York-Penn League. Right-handed pitcher Alex Colome was 7-4 with a 1.66 ERA in 15 starts. He gave up 46 hits and had a league-high 94 strikeouts in 76 innings. Colome, 20, was the only pitcher among the 16 league players of the year.

The Rays were one of three major-league teams to have multiple minor-league winners. The awards were announced today.
Posted by Stacy Long at 1:26 PM