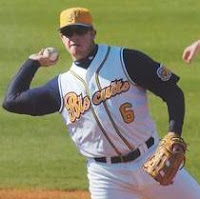 "It’s the one award that I’ve wanted to win since I started pro ball," Longoria said in a release. "I take a lot of pride in my defense, so this award is very special to me."

Longoria, who recently turned 24, is the second Tampa Bay player to win a Gold Glove: first baseman Carlos Pena in 2008. He's also the youngest Gold Glover since Oakland's Eric Chavez won it in 2001 as a 23-year-old.
Posted by Stacy Long at 2:54 PM