Biscuits back in silver surfer uniforms 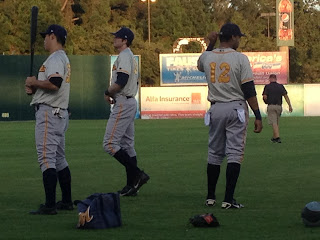 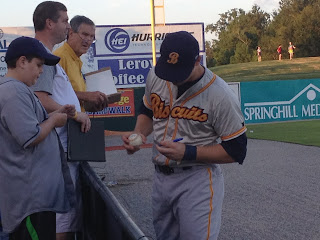 The Biscuits are back in their epically dreadful silver uniform tops. Someone on Twitter asked for a photo, so here's two. I'm told that the players, despite how putrid the uniforms look, prefer the "silver surfers" when it's hot because the usual blue tops are overly steamy.

The team bought the silver jerseys after the Southern League made a rule before the 2008 season. When one team wears blue, the other team can't wear blue, too. If you remember, the final game of the 2007 championship series between Huntsville and Montgomery featured two teams clad in blue.

The silver jerseys are worn with gray pants (and you should be able to see the noticeable difference in color).
Posted by Stacy Long at 6:49 PM